Of course I was out celebrating life with some of my good friends, (click the link to see how we celebrated 🙂 )  so I didn’t have time to post anything about it besides an instagram bday video I created. I knew that when I started the blog back up after recently giving birth to a new born and getting accepted into law school, that things would be difficult at times to manage. However, I am thankful that I continued to rise and soar to new heights.

TJE has accomplished a lot of things last year. Some of those things were posted on the blog, while others were not. With that being said, I want to share some of TJE’s Never Before Seen Footage with you!

My Radio Interview with 97.7 WRBJ|The Beat of The Capital Jackson, MS

The Radio Interview that I did with the Number 1 night show at The Beat of The Capital was one of the dopest experiences I’ve ever been apart of. I was super duper nervous because I’m so used to being on the other side of the interview table. Here, I was being asked questions on the spot so I had to rise to the occasion. Also, speaking live to a whole city is on a whole new playing field. Like what if I completely froze up? That didn’t happen so I guess I’m a natural 🙂

My Blog Interview with TheHoodHippie.com 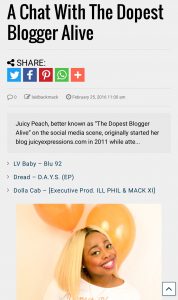 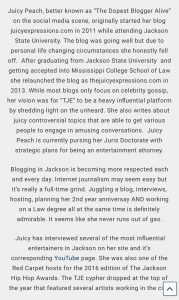 The Hoodhippie.com is a fascinating hiphop blog site covering the latest releases, with a particular focal point on Jackson, MS. Malcolm Morrow , one of the writers for this site, reached out to me with interest of getting my story told on how I became a successful blogger. This interview came at a perfect time because it was a great way to promote The Juicy Expressions’ Second Anniversary Event. I wasn’t nervous doing this interview because it wasn’t live unlike the radio one, however I was just as excited. Go check out the interview at TheHoodhippie.com now and while you’re there make sure you subscribe. I guarantee that you won’t be disappointed.

Almost everyone knows that I graduated from the Best HBCU there is, Thee Jackson State University  Everyone also knows that JSU’s Homecoming is super lit because it’s comparable to a family reunion that you are anticipating, crossing of the days until the big event. With the football game/tailgate being the biggest event during homecoming weekend, last year I decided to throw my own. 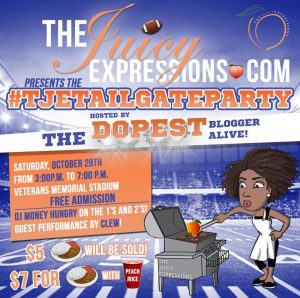 This was my very first time throwing my own tailgate, so I really didn’t know what to expect. However, I learned a lot of things that will make it easier for me to throw more in the future.  The support at the tailgate was amazing, I had so much fun, and there was a super DOPE performance from the skillful artist Clew.

The Wine and Onesies Virtual Affirmation Event  was literally the most powerful party that I’ve ever thrown or ever been apart of. Earlier in 2016, before the beginning of each month, I began writing 30 affirmations to prepare for my month in a positive manner. I started seeing my affirmations come to past and I noticed that I was vibrating much higher. The affirmations that I wrote were a daily reminder to focus on ONLY WHAT I WANTED.

Because the 30 affirmations for 30 days were so successful I was inspired to design an event where me and my friends would create an affirmation jar to construct 365 affirmations for 365 days. What better way than to do this as an end of the year celebration?

Well that’s exactly what we did! Although I only invited my personal friends to the actual event at my house, everyone else was invited to join the party virtual via Facebook and twitter.

Thanks again for keeping up with TJE and I hope you enjoyed the Never Before Seen Footage!